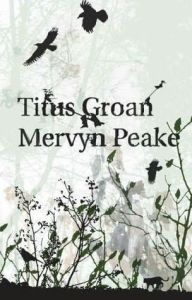 In the discussions at the end of The New Weird, the name Mervyn Peake was dropped a couple of times, and it was proposed that he was one of the godfathers of the modern weird fiction genre. I was hooked on the idea of this obscure trilogy, and as luck would have it I snagged a single volume that includes the full set when the wife and I visited Jackson Street Booksellers in Omaha. Another used bookstore jackpot.

Although he was an English author publishing around the same time as Tolkien and writing stories that might vaguely resemble Medieval times, the comparison of the two writers is not a helpful one. Peake’s world is insular, focusing on a single castle-town and its dynasty, and there are no true fantastical elements in the plot. His angle is intensely internal; he often uses multiple paragraphs to describe a character entering a room or contemplating another character. The language is elegant and entrancing, the apparently slow progress of the plot made up for by relatively brief chapters and the use of multiple perspectives modern readers have come to associate with Martin. My main grumble with the 1999 Vintage Books paperback I have (which is not the one pictured above) is the poor punctuation throughout. There are some odd grammatical structure choices that I assume were the author’s own preference, but the whole novel needs its periods and commas cleaned up if this series is to ever find a renewed life in the current reading world.

Book one is named after the character who kicks off the events of the series: Titus Groan, a newborn in the Groan family and the next heir to the earldom (he has a teenage sister, Fuchsia, who is not eligible but who remains a great character), becoming the Seventy-Seventh. The events of this book take place primarily during his infancy, and it seems that the title of the second book in the series might fit better here: the castle itself is called Gormenghast, and often it is this edifice whose tale is being told. After certain chapters focus on individuals in the family line (Sepulchrave, Fuchsia, the Countess) or without (Flay, Swelter, Keda, Steerpike), another chapter might begin with a sweeping check-in on the activities or thoughts of the relevant cast members. Although the settings are often gloomy and the characters trapped in trite ancient rituals, it’s evident that Mervyn Peake is having fun throughout. Take this description of two ladies of the castle who are twin sisters: “Their faces, identical to the point of indecency, were quite expressionless, as though they were the preliminary lay-outs for faces and were waiting for sentience to be injected.” There doesn’t exist a physical characteristic the author hasn’t toyed with.

Peake’s main goal is to outline how the new child is destined to disrupt the castle’s boring routines. Traditions are the lifeblood of those who play the roles. As is described of Lord Sepulchrave regarding how much (or little) he thinks about Gormenghast: “To have asked him of his feelings for his hereditary home would be like asking a man what his feelings were towards his own hand or his own throat.” This complacency is what makes possible the rise of someone outside the family, namely Steerpike, a former kitchen employee whose clever ambition and risk-taking allows him to ingratiate himself in the royal family for his own ends. Trying to figure out Steerpike’s ultimate goal when the character himself is unsure (he is simply experimenting with how far to push things) is a primary joy of the reading experience. His obstacle to finding a permanent foothold is not necessarily the people but the machine itself:

He had not reckoned with the ancientry of the tenets that bound the anatomy of the place together. For every key position in the Castle there was the apprentice, either the son or the student, bound to secrecy. Centuries of experience had seen to it that there should be no gap in the steady, intricate stream of immemorial behaviour.

There are a lot of mysteries in Gormenghast the castle and Gormenghast the three-part story. Part of me is tempted to claim it as a brilliant, unsung work that I reveled in, as one does when one reads a moderately lengthy, somewhat intricate work and feels the need to justify the time spent. I’m not sure I’m ready to go that far, although the book plenty intriguing and I did want to turn the next page to start on book two right away. I’ll probably let things sit for a while and let my curiosity build again. But someday I’ll need to know what the grown Titus Groan gets up to.