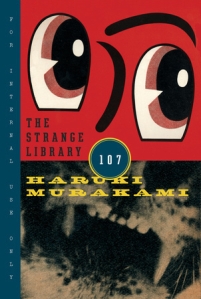 “Why do I act like this, agreeing when I really disagree, letting people force me to do things I don’t want to do?”

Murakami’s dreamlike story centers around the protagonist’s willingness to go along into a shady situation, a willingness not understood by the character himself. The strange library of the title is the actual city library, an anchor of realism employed in regular Murakami style to counterbalance the unreal plot that unfolds.

Throughout the story, the young man (boy, perhaps?) is worried about his new shoes, his pet startling, and most of all, his worried mother back home. Yet he goes deeper underneath the library under the persuasion of an evil man, and continues to be honest and confounded by his compliance: “I had no idea what he was talking about, but I dutifully said yes when he had finished.” Down deep, he meets the subservient sheep-man, as well as a ghostly girl who talks in blue text, bringing to mind the effective strategy from House of Leaves.

The photo-realistic art direction by Chip Kidd adds much to the story. There’s an image to accompany almost every page, or sometimes a double spread, such as two pages split by a moon on one side and a close-up of a sugary donut on the other. At the climax of the action, the imagery is used to great effect. While the story would work just fine as a conventional tale in a standard collection, this version makes it pop and come alive.

Does the boy make it home? Does he emerge from the dream? If he does, his life is changed by his visit to the strange library. Uniquely, the book is a love letter to libraries in which the character doesn’t want to go back to one, being scarred by his visit there.

One thought on “The Strange Library”