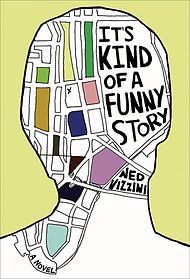 I didn’t know a thing about this book or the author, so I caught up quickly with Rachel Cohn’s foreword. Turns out, Ned Vizzini spent five days at an adult psychiatric hospital, wrote this book immediately afterward (all of it within a month!), and then sadly ended up committing suicide at a later point. This makes It’s Kind of a Funny Story an autobiographical novel of sorts, although one with a tidy ending where everything turns out for the best. I guess that makes it a comedy.

And it is kind of a funny story. Vizzini seems in his central element when writing about his mentally spiraling high schooler, Craig Gilner. Craig’s problems are in his head, brought about mostly by the pressure to keep up at a high school called Executive Pre-Professional. Do places like that exist? Sounds like hell on earth. Craig approaches everything with a candidness that I never had at that age, and despite his mental breakdown issues, he’s an admirable character because of his commitment to do better, and eventually be better.

Craig’s tale is also sad, of course, due to confronting the frustrating happenstance of depression. Is brain chemistry mainly to blame, or the aforementioned pressures of school? The fact that he has a supportive family shows that the diagnosis can happen to anyone. His parents have the right priorities: “My mom seems happier about me getting into the hospital than she was about me getting into high school.” Craig finds this weird, whereas I find this encouraging.

Vizzini writes the high school crowd well, although the bulk of the book takes place in the psychiatric hospital (for short-stay patients, as opposed to a mental ward) where a cast of very colorful characters intermingle. Craig finds a way to thrive in his new setting, and for every previous friend he risks ostracizing, he makes a new one here (I almost wrote “on the inside,” which makes it sound like a prison, which, perhaps, it bears similarity to—perhaps Craig even notes this in the story). He even manages to land a girlfriend.

I can see how a book like this could hit incredibly hard for the right person. It could provide emotional connection as well as comedic relief to someone suffering from depression, and seems a handy guide for the family members of such a person (especially if he or she is a teenager). As a YA novel I found it amusing and cohesive, although without a related experience in my own life I’m not head over heels for the book. Vizzini’s real life story is a sad one, for sure. But you could do worse than leaving behind a work like this.