Part of series: His Dark Materials (#1) 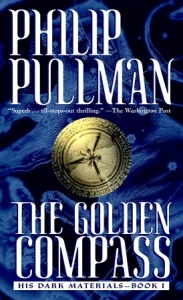 How is it that everything in The Golden Compass just feels so perfectly in place? The story ticks like clockwork. Or compasswork.

It’s probably the fact that Philip Pullman has raw storytelling skill. I’ve been chipping away at his Fairy Tales From the Brothers Grimm, in which he tells his preferred version of each tale and has the audacity to make minor improvements throughout. But his actions are justified, because he has a razor-sharp understanding of how a story should work.

I remember cracking into this first installment of the mighty His Dark Materials trilogy on an airplane trip I was taking alone, which proved to be the perfect setting because it’s a great story to get trapped within. I distinctly remember sitting in the far back corner of that plane (right side) while reading about the plucky Lyra hiding in a stuffy study of an English college and listening to powerful adults spill their mysterious secrets.

And in even those early pages we read of the daemons.

What a brilliant creation. The first time I read the book, I pronounced it “day-mons” in my head because of the weird spelling. What is the smushed together a + e actually called? (I could look it up but it would be much more fun to hear it explained.) This time through I tried to pronounce it “demons,” which brings the modern, symbolic usage of the word to the forefront. Our demons are our base impulses, the little animals of wildness that rage within. As a kid we are often intensely controlled by them. By adulthood we try to master them. (Though sometimes we stay down with our demons.)

The world of the novel is fully realized, a sort of alternate steampunk present where places like “New France” exist and the “gyptians” call to mind a mix of “Egyptians” and “gypsies” (or perhaps this etymological relationship was already true and just never occurred to me). Pullman slowly leaks his big ideas into Lyra’s personal adventure, making the reader wonder about “experimental theology” and the potential power of the golden compass, referred to as an “alethiometer” in the book. Lyra has the power to read the instrument, which requires her to allow her mind “settle into the right meanings like a complicated diagram in three dimensions.”

The reading experience is utterly enjoyable, every paragraph delivering what you wanted next: here’s a piece of world-building, here’s the inner turmoil of the heroine’s dilemma, here’s a stretch of dialogue that helps clarify the plot instead of obscure it. Every page has momentum, every chapter unfolds deliberately. We don’t get the full mythology but we get plenty. Pullman is interested in free will: “We are all subject to the fates. But we must all act as if we are not, or die of despair.” (Wisdom from the mouth of a witch.) A brilliant conceit is wrapped around the journey pulling the characters north, and further north, which we conceive of as up, until they are actually climbing out of the top of this world and into a glittering heavenly city.

But it all comes back to the protagonist, and it’s a shame that more readers don’t instantly recognize the name “Lyra Belacqua.” She’s wily and willful, a skilled liar (hence her name), and absolutely the most fun person to cheer for. She’s a chosen one in the Frodo and Harry mold, finally articulating that “I wish it was someone else instead of me, I do honestly!” That may be true, Lyra, but from this side of the page, we’re sure glad that it is you. You are a worthy addition to the annals of heroism, no matter what happens in the rest of your trilogy.