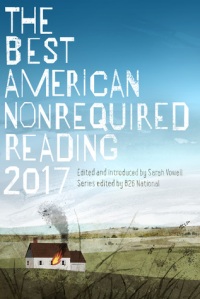 If 2016 was the volume that felt like a last big inhale before American politics crashed down at the end of that year, then this year’s BANR collection is the painful exhale, reading like a greatest hits of confusion and fear about our current state.

Daniel Gumbiner’s brief editors’ note points out in its first sentence that “it seems more difficult than ever for us to arrive at a consensus about what it true.” The longer introduction by Sarah Vowell gets to Donald Trump by the fourth paragraph, and the rest of the intro is a batshit highlight reel of the things that Trump actually did and said but that could not, in the end, prevent his rise to the presidency. (In case you need to feel that twisting hollowness in the gut once more.) Even the cover art for once seems to evoke the mood of the book. Some days the landscape seems peaceful, but the house is, indisputably, on fire.

What this means for BANR 2017 is that anything not about the current political climate is inherently less interesting and vital than the items that are. The first entry, the brief “Fable” by Teju Cole, is an allegory about “the Adversary” growing stronger against a people’s predictions. A spiritual sibling is Mark Polanzak’s “Giant,” about a large being who is interesting when he first comes to town but then won’t go away. Are these examples of the “best” writing of the year? Probably not. But they fit the times.

Several of the essays feel familiar from having been circulated heavily online. These include Masha Gessen’s “Autocracy: Rules for Survival” and the piercing closer “Who Are All These Trump Supporters?” by the incomparable George Saunders. (That one originally appeared in the summer of 2016; I’m not sure why they reached so far back for this “2017” selection, but I’m glad I have it in print all the same.) I’m also grateful for the inclusion of Ta-Nehisi Coates’ “My President Was Black,” which serves as a thoughtful post-script to the Obama presidency. I had never really understood how Obama was culturally “black” until reading this essay, and I especially liked the areas where Coates and Obama disagree. The piece pairs well with Marilynne Robinson’s interview with the former president in last year’s book.

Well. Just needed a second to once again reel mentally from contemplating the dramatic fall from one sitting president to the next. God. Damn.

Other selections that are very current include Louise Erdrich’s reporting from the Standing Rock protests in North Dakota and an excerpt from a legal decision by Justice Sonia Sotomayor. The presumably fictional story “Uncanny Valley” by Anna Wiener feels like a compact version of what I imagine The Circle to be about, and it’s followed by Andrew Sullivan’s first-hand account of coming out of a technology-induced hypnosis, “I Used to Be a Human Being.” I’d bet we could track a general increase in writings about technology throughout the past 15 years of BANR, but the peak might be at hand.

There are a few other illuminating pieces, including an oral history of a twin whose brother died, a grim memoir about growing up in a Mennonite community, and an even grimmer recovered diary of a work camp prison guard from Siberia in 1935. These intense entries would stand out in any BANR collection, but this year it all comes down to that Saunders essay, expertly placed at the very end the book: an account of facing the many mini American paradoxes, and the anxiety that came when “the center failed to hold.”

One thought on “The Best American Nonrequired Reading 2017”