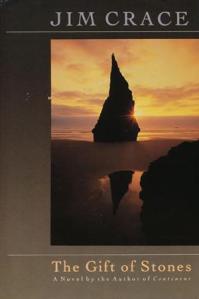 Before visiting Iowa City, I flipped through a little book I have called Read This!, which puts together a bunch of favorite book picks from book store owners across the country. Something that stuck with me was a man from Prairie Lights proclaiming his love for this title by the underestimated (according to him) Jim Crace. I didn’t end up buying anything from that store, but when we headed over to The Haunted Bookshop on the same day, I saw The Gift of Stones on the shelf and it seemed like the perfect buy.

Another thing that both the interview I read and my in-person chat with the bookseller revealed was how Jim Crace is known for deliberately avoiding historical research. The Gift of Stones takes place in an unspecified time when a village relies on toolmaking and trade, before a major clash of cultures visits them and introduces the future (which will come in the shape of bronze). The author’s stone age is not depicted through cavemen oogs and uggs, but rather a poetical lyricism that lifts life off the page.

The book has a lot to do with story, and is relayed through the words of a daughter telling the story of her father. Her father was a storyteller, bound to the fate after an injury took an arm of his as a youth, so he could not work the stone like those around him. Instead, “He’s chipping and he’s knapping at the truth. He’s shaping it to make a tale.” All we have is the stories passed down by this ultimate tale-spinner, so no single plot point can be taken for certain. But the broad strokes tell emotional truths, such as the young man befriending a grieving widow who lives alone with a small child. This woman, nicknamed Doe, possesses one of the only proper nouns in the slim book.

To capture a place and a time like this, even under the pure guesswork of using the novelist’s craft, is a kind of small miracle. To the “stoneys” who work constantly for their livelihood and their identity, “the gift of stones” of the title is the way that it lets them become “secure and virtuous by labor.” It is “their salvation and their numbness,” bestowing “a world of symmetry and of composure.” It’s a snapshot of a people who know their narrow role in the world, and the author neither condemns nor praises this state of affairs, but only outlines its brutal possibilities. It is a story of people, of nature, of place, and it is both of a time and entirely out of time.