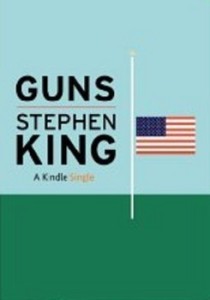 Throughout my re-reading adventure of The Dark Tower series, I kept thinking back to this essay that Stephen King released in the spring following the Sandy Hook school shooting in Newtown, Connecticut. I had remembered that part of King’s goal was to shift the blame away from pop culture. There was also an Entertainment Weekly article around the same time that seemed to have a similar goal: display introspection and concern, but with an underlying message of “not our fault.”

The Guns single by King is compelling, and sure to make tempers flare depending on one’s view. Its opening part, “The Shake,” is an eviscerating, sorrowful step-by-step of how an American shooting story unfolds on primetime news. For example, step sixteen describes the “slow and luxurious licking of tears from the faces of the bereaved … the best part of Number Sixteen is that the cable networks are now free to resume commercial messages.”

The next part is King’s story about the publication of Rage, his earliest novel, the plot of which follows a troubled teenage boy who commits a shooting tragedy. The book had been referenced and owned by actual shooters over the years, and eventually King pulled the book from circulation (not without some soul searching). He eventually explains how these young men all seemed to have bad home lives plus access to guns which they shouldn’t have. He also gives an effective description about how high school sucks for most people, and can be brutal for the social underclass. That is all true, though the question remains about the effect his book may have had. He admits that the text was “a possible accelerant, which is why I pulled it from sale.” He still defends its existence, because although it was not a great piece of writing, “it contained a nasty glowing center of truth that was more accessible to me as an adolescent.” To spread violent art, or to keep it in check? It’s tricky terrain.

Much of the essay dives into the political mire that is known as the American gun control “debate.” King gives his credentials as a gun owner in an apparent attempt to keep his Second Amendment readers flipping the digital pages, and warns to his liberal followers that he’s not here to “preach the Gospel of Gun Control.” He does go on to do just that, at least to the extent that he’s for restricting the sale of certain types of guns, a measured approach that still counts as “our rights are being impeded” to a certain portion of the population. So those readers probably didn’t click through to the end.

The essay is a whirlwind of emotional opinion, peppered with selective facts and stories. It feels both confident and desperate in equal measure. King definitely sounds like his “Uncle Stevie” persona here, being humorously condescending by using forms of address like “honey” and describing Americans discussing politics as “drunks in a barroom.” King has a great grasp of Americana and is a storyteller of his own nation, if nothing else, so it’s easy to get swept up in his rant because, after all, he has studied us for decades and has seen a few things. The whole essay would be fascinating to dissect in a rhetoric class, with so much going on in both content and delivery that you could spend hours objectively analyzing the piece.

But the part that intrigues me the most is “Culture of Violence.” This is where King responds to a conservative argument that a “culture of violence,” and not the guns themselves, are to blame for mass shootings. He uses a peculiar tactic: he lists current pop culture properties that Americans love, and uses the list to show that we aren’t gun-crazy (at least in our entertainment consumption). He stumbles right off the bat by getting a plain fact wrong: in listing the “ten most popular works of fiction published in 2012,” he starts with A Game of Thrones. He’s off by a decade and a half (the book was published in 1996). Perhaps he meant best-selling, which would make sense, and that’s fine. His dashed off reason that A Game of Thrones has no influence on our psyche is because it has “no guns, just swords.” I guess this explanation holds a few droplets of water if you’re just talking about the book, which is not a visual medium. But it only really makes sense to discuss this property in its TV incarnation, which popular today in the first place. I get that the essay is called Guns, but to claim that Game of Thrones (the show) has nothing to do with glorifying violence is beyond false. Is King confusing this show with the movies of The Lord of the Rings (for which his argument would make a bit more sense)?

King does dive into TV examples, but the ones he mention seem to completely undercut his own argument. Breaking Bad was blowing up in popularity at the time of this essay, but he claims that it didn’t really appeal to teens (not sure where to even go about validating this, as I’m sure tons of teens were downloading that show; not to mention that adults can go on shooting sprees too, right?). Regardless of audience, that show (which I really liked) fetishized certain aspects of drugs, cars, and violence. Then there’s The Walking Dead, which King says does appeal to teens but the gunplay is all “directed at people who have already expired.” Hmmm. I get it… sort of. But could it be that we have just given the zombie fascination a free pass because we need an acceptable vehicle for shooting hordes of creatures in the head without guilt? It’s like my mom being wary of the computer game Counterstrike all those years ago. As a teen it comes across as an overly worried parental complaint (the response: “it’s not like I’m going to go out and shoot anybody, Mom”) but as a parent now I do cringe at how quickly we numb ourselves to shooting fake entities or watching fake entities get shot.

King concludes that “Americans have very little interest in entertainment featuring gunplay.” So how about that adaptation of The Dark Tower? I haven’t seen it yet and I don’t feel like I’m missing out due to the terrible reviews, but the trailer featured nothing but gunplay. King gave his endorsement of the movie, although people have made the observation that perhaps he’s just incapable of judging good cinema. This blinkered judgment does seem to be another piece of evidence that his original assessment of pop culture titles in this essay was shaky.

Sean O’Neal from The A.V. Club provides a more recent piece on the interplay between guns and pop culture. This is a funny and nuanced take on the paradox between the gun-shy political left and the gun-heavy entertainment they seem to love. Writing mostly from his own experience and putting the burden on no one but himself, he notes how through fiction “we can get all the thrills of gunning someone down with none of the guilt, and it frankly doesn’t matter whether we’re the hero or villain in that scenario.” He also notes how the intellectual justification for housing gun violence within a piece of art may serve as only a thin mask:

There is an argument to be made that the sort of cool, intellectualized gun violence Scorsese and Tarantino popularized has colored our perceptions of it—particularly for effete pacifists like myself. They’ve elevated the pleasures of seeing someone coolly emptying their Smith & Wesson above mere, primordial id-tickling, making it something that feels more acceptably cinematic—ameliorating its horrors by rendering them reassuringly artistic.

He tidily sums up a point that seems to contradict King’s take on the “culture of violence”:

Never mind that there is still isn’t actual statistical data directly linking gun violence in the streets to gun violence in movies—or video games, or gangsta rap, or whatever media scapegoat Wayne LaPierre inevitably trots out for slaughtering in the hours after the latest mass shooting. We don’t have to plead blinkered ignorance here. We can admit that movies have, at the very least, made gun violence seem more conventional. We’re adults here. We can also acknowledge that pop culture has made guns seem really, really fucking cool.

There are also points where the two writers would agree. King worries that the PG-13 rating gives the message that “shooting people equals wholesome adventure” and that this refuses “to acknowledge what happens to people who take a bullet in the stomach or the head.” He uses Skyfall as an example of bloodless cinema… but if he updated this for 2017, he could use The Dark Tower.

And perhaps this goes back to movies and TV just not being King’s strength. Because the truth is that his books quite often are nuanced and thoughtful, even when he’s deep into The Dark Tower novels, which has a lot to do with gun-wielding protagonists. In The Drawing of the Three, he describes the gun’s allure: “Yet there was some part of him that wanted to hold it, that responded to its perfectly expressed purpose, that sensed its dim and bloody history and wanted to be part of it.” In The Waste Lands, the same character reflects on the addictive quality of the weapon: “There was another part of him which understood that this was just another deadly drug…but that did not alter the thin, tight pleasure of the moment.” A side character in The Wind Through the Keyhole recalls a saying that guns have “eager hearts”…”or perhaps he said evil hearts?” and a young Roland himself muses, “I wonder how much difference there might be between the slavery of the mine and the slavery of the gun. ”

These are all poetically crafted statements about our internal conflicts in dealing with the appeal and danger of guns. Both King and O’Neal do coalesce on a core point that artists and viewers can, and should, be able to separate their tastes from real world violence. O’Neal writes: “[There is a] problem of approaching this like a zero-sum argument—that if you think guns are cool, or you help peddle the illusion that they are, you aren’t allowed to wish that fewer people were using them on each other. That’s simply not the case.” King would wholeheartedly agree. His essay, if confusing on a few points, does read as a heartfelt plea for less killing. He also wants to be able to be an author without restrictions, to provide entertainment for someone like O’Neal to enjoy. Both creator and consumer may want “to dramatically reduce their presence—to largely return guns and the violence they cause to the realm of the fantastical, where [we] can hypocritically enjoy them as the rarified, deadly, mysterious objects that they are.”

I don’t own guns and I don’t like a lot of gun-related entertainment (and when I do, I like it fantastical). After each tragedy the blame game will continue to swirl. Our society will probably end up producing more guns and more entertainment about guns. I’ll still have The Gunslinger on my list of novels that left an impression. And I’ll remain afraid of what guns can do.