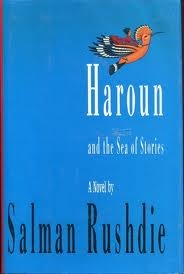 Haroun’s father, Rashid, is a master storyteller whose skills are in high demand. But when Haroun’s mother runs off with another man, Rashid’s skills start to fade. He is also crushed by Haroun’s question to him: “What’s the use of stories that aren’t even true?” The book is Haroun’s journey of discovery about the magical source of stories themselves.

Haroun stumbles into a strange world after meeting Iff, a Water Genie. He soon encounters other strange creatures, such as a mechanical bird with the humorous name of Butt the Hoopoe. Rushdie’s plot lends itself to all sorts of wordplay (the two characters just mentioned allow for a chapter titled “An Iff and a Butt”), as if this tale is a slightly more grown-up cousin to The Phantom Tollbooth. And like that book, the adventure is somewhat piecemeal and arbitrary. For example, the villain, Khattam-Shud, is pretty direct about his intentions: “The world is not for Fun. The world is for Controlling.”

Rushdie gives the expected commentary about stories. He uses the Plentimaw Fishes to illustrate:

When they are hungry they swallow stories through every mouth, and in their innards miracles occur; a little bit of one story joins on to an idea from another, and hey presto, when they spew the stories out they are not old tales but new ones. Nothing comes from nothing, Thieflet; no story comes from nowhere; new stories are born from old—it is the new combinations that make them new.

Does Haroun get his answer to the real use of stories? Sort of. He has a great adventure and sets the world to right and earns his dad the storytelling powers back. For Haroun, stories are important because he physically goes to their actual originating wellspring. On a more direct level, I’m not sure that Rushdie really cements a particular viewpoint about how stories work in the real world, or why. The birds, fishes, iffs, and butts are all good fun though.