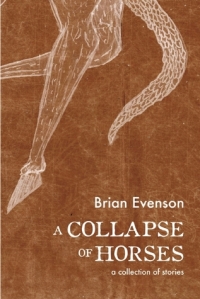 In opener “Black Bark,” two men ride on horseback, trading brief exchanges in a Cormac McCarthy setting. One is badly injured but seemingly unfazed; the other worries for his partner and keeps pressing the need for rest. They eventually find a cave and start a fire. The injured man, who is losing far more blood than seems credible, eventually tells the story of black bark. It’s a strange tale and rubs his partner the wrong way. When the listener asks for clarification on an irrational point, the injured man says, “That’s not part of the story. That’s the part that gets left out.”

Brian Evenson’s collection builds miniature worlds on the tension and frisson of what gets left out. Some readers hate this: they feel that absolutely everything should be on the table by a story’s end. But what Evenson does here is the best kind of balancing act. Each story’s hook is keenly sharpened, pulling you into the center of a tortured psyche. There is forward momentum and the assurance that you are being led along for a reason. Revelations are revealed through a steady drip of plot tinged with unease, with each story wholly delivered and wholly strange.

Many of the stories create a psychological whirlpool, a grasping at the confidence of knowing one’s mind. “A Report” finds a man in prison for some unspecified crime against the state, and the prisoner is left to tease out potential messages he hears from other prisoners he never sees. The protagonist in “Click” is given a notebook to record why he committed an atrocity he can’t remember (calling to mind Jeff VanderMeer’s “The Strange Case of X”) until he slips so far inward that his world becomes flimsy cardboard. The most direct example is the title story, which asks a sort of Schrodinger’s cat question about the mind’s inability to hold two conflicting realities at once. We might instead call this quandary Evenson’s horses: are they alive or dead? (That is, has the character actually burned his family to death, or has he not?)

The acutely personal is explored in various relationship pairings: a man who can’t shake an unhealthy girlfriend in “Cult,” a son who wants to both approach and escape his deceased father’s influence in “Past Reno,” and the heartbreaking couple in “BearHeartTM” (expecting parents: do not read this story). Then there are pivots into speculative fiction, such as “Any Corpse.” With a minimal setup but just enough alien intrigue, Evenson crafts a “be careful what you wish for” tale that also connects to the potential dangers of artificial intelligence. “The Dust” is the longest story in the book, a sci-fi detective romp that reads like a paranoid twist on Isaac Asimov. The inevitable psychological horror will have you questioning your own motives and intentions, so firmly do you root for the security officer whose job it is to maintain order in an isolated facility.

What is my body? What happened to my mind? What have I done? Many of us seem to be swirling with these questions in these strange days that have us questioning the nature of our reality. If there is any comfort to be found in Brian Evenson’s book, it’s that he masterfully brings it full circle for the sense of resolution the reader wants. “The Blood Drip” refers to the very blood dripping from the rider in “Black Bark.” The book begins and ends with the promise of a story. I’m still not sure if we want to know the details. The part that gets left out might be what finally breaks us.