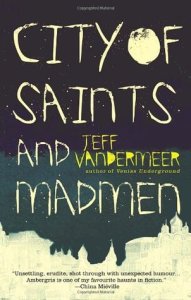 The first version I found at Half Price Books was only “The Book of Ambergris.” It’s an older paperback with the cover evoking a surrealist Spanish painting, an appropriate little artifact that vibes well with the contents of the book. And there is a clear love of books within the pages themselves: the first character you meet tries to find a unique book to give to a woman he falls for. And in Ambergris, for whatever reason, there is an unaccountably high number of publishers, historians, authors, and artists.

“The Book of Ambergris” features the four core Ambergris novellas. First is “Dradin, In Love” which sets the stage for every strange thing to come. Written in a thick, flowing prose, “Dradin” introduces us to the strange city where “buildings battled for breath and space like centuries-slow soldiers in brick-to-brick combat.” It’s a place constantly on the verge of anarchy: “like a renegade clock, it ran on and wound itself heedless, empowered by the insane weight of its own inertia, the weight of its own citizenry, stamping one, two, three hundred thousand strong.” Dradin, a failed missionary, returns to Ambergris just before the Festival of the Freshwater Squid, a particularly wild night of revelry. He is one of the many changed by the city around him.

This potent story is followed by “The Hoegbotton Guide to the Early History of Ambergris,” by one Duncan Shriek. A right turn in tone, this piece is a blast. Shriek writes a pamphlet sold by the questionable store Hoegbotton & Sons (featured in the first story), but he’s a historian wary of dry histories. For fear of putting his reader to sleep, he uses footnotes to inject humorous asides. This postmodern experiment holds up perfectly, and is VanderMeer at his most creative (not to mention thorough, attempting a Tolkien-esque overview of his fiction’s histories). Most intriguingly, Shriek’s guide gives us the shadowy history of the mushroom dwellers, or “gray caps,” an indigenous race who live underground and seem to control the ever-present fungus that infiltrates Ambergris. And just when you’re bummed that “Early History” has come to an end, it’s followed by a glossary. Penned by Duncan’s sister Janice Shriek, it’s an alphabetical list of the proper nouns from the guide. But of course it’s not that simple: it’s really an extension of the miniature stories themselves.

The last two works in “The Book of Ambergris” turn back toward the serious. “The Transformation of Martin Lake” follows an artist whose unwilling participation in ceremonial violence (and the city’s vicious politics) causes him to create art that puts him in the history books. “The Strange Case of X” dives right into metafiction, chronicling a man under psychological scrutiny who claims to have been transported into—and then writes stories about—a wondrous place called Ambergris. For example, this mentally unstable character wrote Dradin, In Love and Other Tales of the City. This is where VanderMeer becomes one of his very own madmen, questioning reality itself. The story spawns one of the author’s strongest quotes: “It is the nature of the writer to question the validity of his world and yet to rely on his senses to describe it. From what other tension can great literature be born?”

I fell hard for VanderMeer’s brand of tension. That’s why I was only too excited to realize that there were expanded editions of this book. I instantly sought out the updated City of Saints and Madmen (the one with the cover featured above) and couldn’t wait to get into more Ambergris. I knew this version was great when the “Other Books By The Author” page included some real works (Veniss Underground), some that exist within the Ambergris reality (The Refraction of Light in a Prison is the book acquired by Dradin), as well as others previously unmentioned that hint at further mysteries uncovered.

The first half of the full edition is made up of “The Book of Ambergris,” and the back half has added material. The most immersive selection is “King Squid,” an amusing scientific monograph by one Frederick Madnok, which explores (alongside flowery artwork) the importance of the squid that come up the River Moth and their key role in Ambergris’ economy and cultural identity. Fantastical naturalism is one of VanderMeer’s strongest niches, and readers of his more recent work might perk up at the mention of “the relationship between scientist and tidal pool.” Similar to “Early History,” “King Squid” has a bibliography of equal length to the story itself, with entries like “Flaunt, Contense T., How to Order Your Bibliography for Maximum Reader Impact, The Writing Life Consortium.” These are some of the most fun pages in the book.

The other notable addition is “The Cage,” a story that can’t exactly be called standalone (because everything about Ambergris is connected) but functions well as a self-contained horror story. It has plenty of fungus and sweat and distrust, not to mention the ever-present threat of the gray caps. Because the protagonist is one of the Hoegbotton curators, the story fills in yet another crucial piece of Ambergris history.

All told, it’s the immersive feeling and distinct sense of place that most affect the reader, regardless of the story or character featured at any given point in the book. In a recounting of the challenges behind constructing City of Saints and Madmen, VanderMeer relayed, “Somewhere out there, Ambergris existed, and I was just channeling ‘reports’ from the place.” There seem to be countless possible layers to discover, with lines blurred between the written stories and the referenced ones. (Who wouldn’t want to read Vivian Price Rogers’ The Torture Squid Beat Up Some Priests, especially when we get a glimpse at the classic paperback cover art?) VanderMeer’s mind is one of a kind, creating an obscure history in an aggressively modern fashion. The whole thing is ambitiously lofty without ever feeling pretentious; highly experimental yet purposeful, present, and effective. Does Ambergris excite us or make us afraid? Do we want to visit the city, or run away from it? Amazingly, it feels like you could really answer these questions, as if the place really existed.

One thought on “City of Saints and Madmen”