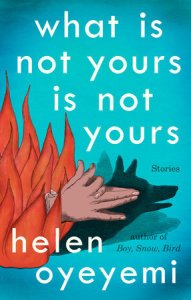 Oyeyemi’s latest stories are bound by many things: puppets, gay relationships, the characters themselves, and, most of all, keys. The author’s working thesis is summed up in this statement about a key ring: “Always up to something, stitching paths and gateways together even as it sits quite still; its powers of interference can only be guessed at.”

And Oyeyemi does give her objects power, writing magical abstraction into her symbolic keys and doorways. I’m a sucker for the conceit, though a couple times it does seem shoehorned. In “‘Sorry’ Doesn’t Sweeten Her Tea,” the core story about a teen girl’s disappointment with a wayward pop star is solid enough. The weakness is that the protagonist is someone else entirely, and his peripheral issues (including the keys) seem beside the point.

The stories that worked best for me were the ones closest to pure fable, such as “Drownings.” This is partly because of the focused cast of characters. Several of the other stories feel so full of names that I could lose my way over the course of a paragraph. Others seem to have only a half-baked premise, like the atmospheric but ultimately confusing “Presence.”

After appreciating but feeling frustrated by Boy, Snow, Bird, I was looking forward to Oyeyemi in short story form. I almost feel bad that I didn’t like this collection better. On paper, it should work wonders. But I guess I’m just not on the same plane as this author. The puppets are all on display, but I can’t make out the shadows on the wall.