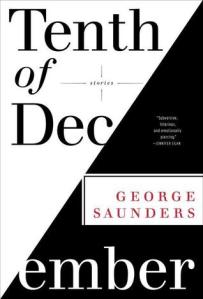 Ten stories by the esteemed Mr. Saunders. I applaud sticking to the concept, sir.

“Victory Lap” starts in a wave of uncertainty, with the risk of being odd to the point of inaccessibility. But partway through it becomes evident that the stream-of-consciusness zigzagging fits the teen narrators, and then a plot coalesces that truly propels things forward. By contrast, “Sticks” is only two pages long and relatively straightforward, a sort of narrative poem on the attempt at communication by a father.

“Puppy” makes things three-for-three with the parenting theme, highlighting Saunders’ interest in what it means to bridge families vertically through the generations and laterally through class. Of the children in this story, one mother concludes that “They didn’t have to feel what you felt; they just had to be supported in feeling what they felt” while another woman has pride at the end of the day due to her incremental ingenuity in being considerate to her husband and son.

“Escape from Spiderhead” is a quick-moving piece that riffs on Brave New World and the implications of punishment, experimentation, and a mad grasp at utopia. “Exhortation” is an upbeat letter from a supervisor to his employees, about why they should stay positive about the questionable (though specifically unstated) work they must perform. “Al Roosten” offers a quick character study of a middle-aged man and his insecurities about status, all of which are further explored in “The Semplica Girl Diaries.”

“The Semplica Girl Diaries” is the book’s tentpole in both length and impact, told in stilted diary form from a dad working to make ends meet and provide a stable middle-class upbringing for his three children. He is influenced by others’ affluence and makes questionable choices while keeping up with the Joneses, especially in regards to acquiring a set of living girls who are used as lawn ornaments. This story is not only startlingly funny but also hits home for modern fathers in particular. It contains a few of Saunders’ white-hot truth beams, like:

Have to do better! Be kinder. Start now. Soon they will be grown and how sad, if only memory of you is testy stressed guy in bad car.

Questions of maleness are further explored in “Home,” about a returning war veteran and his hazy psyche and shattered family, and “My Chivalric Fiasco,” a short fun/sad take on what happens when good intentions go wrong (brought on by the assistance of Proper Noun Medication—another running commentary throughout Saunders’ stories).

I remembered the title story from BANR 2012, though I grew fuzzy on the details. It’s not only a fine summary of the book as a whole (musing on what it means to be a man, what it means to live a life) but also a true pillar of sympathetic writing. It’s a story meant to exercise the brain but more importantly, expand the heart. We are all out on the ice, either sliding into the freezing water from our own doing or working hard to pull someone out. We have to remember the warmth.

3 thoughts on “Tenth of December”