Part of series: The Wildwood Chronicles (#1) 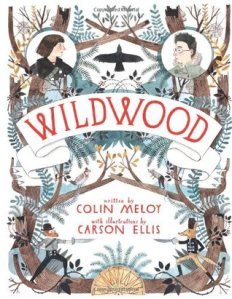 When you’re in a world of bandits, thieves, animals, woods, family drama, and rusticism, there’s a good chance you’re in a Colin Meloy tale. Usually it’s one shaped into a song by The Decemberists, but for his first prose outing Meloy has toned down the darker elements of some of his other stories to keep this one aimed at the pre-teen set. There is still plenty of drama and death, as main characters Prue and Curtis stumble from Portland into the Impassable Wilderness during the middle of a civil war.

It’s a recognizable Narnia attempt, and it succeeds on the whole. Prue is on the search for her baby brother, who was lifted off the street by crows. She finds animal friends and enemies, whereas Curtis gets conscripted into a coyote army and comes under the sway of the Dowager Empress, making this part of his story arc a pretty straight resemblance of Edmund Pevensie. Even though the Empress is obviously the evil character, it’s not all just good versus evil. Wildwood is divided into a few different provinces, each with their own loyalties and political ideals. Most of Prue’s adventure centers around trying to unite some of the factions who may benefit from doing so.

While the book is longer than it needs to be, it’s greatly enhanced by the intermittent illustrations by Meloy’s wife Carson Ellis. Fans of The Decemberists will recognize her distinctive style from the album covers, and the pictures add just the right amount of suggestion and playfulness here. More books, and not just those for youth, should be so lucky to have an artist who so accurately captures the spirit of the tale.

Where the story most clearly distinguishes itself from the workings of Narnia is its handling of Wildwood’s relation to the world at large. The fantantiscal land is magically hidden from view and access by ordinary human citizens, but this is no wardrobe that exists on its own clock. When Prue returns home, her parents have been missing her and her brother due to the normal passage of time. Her parents are also part of the story, not oblivious in the way of fantasy adults, or simply ignored. This makes Wildwood a nicely tangible experience, and a worthy one for an early reader’s experience with stories about leaving home and fighting a way back again.