Full title: How to Read Novels Like a Professor: A Jaunty Exploration of the World’s Favorite Literary Form 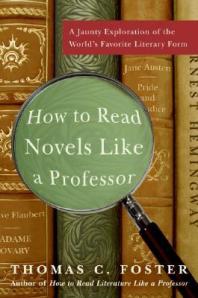 Foster engages readers in a conversation about the form of the novel and in doing so illustrates one of his primary points: the novel’s enterprise is to establish a conversation between author and reader, between text and the next text, between every society that came before and the only one living today. It’s easy to see how much Foster enjoys reading, and although he does dwell on several classics throughout the length of his book, he also includes a slew of modern novels to use as examples (as well as short asides into the strategies of poems, music, film, and other art forms). Foster playfully hones in on specifics by crafting “Laws” that pop up in his witty discourse:

But while Foster is adept at perceiving patterns of the form, he constantly points out that the novel is expansive and malleable (he finally gets around to asking “what is a novel?” on page 256). The book succeeds in its ultimate goal: to make the reader want to read more, more, more. And Foster ends by emphasizing and re-emphasizing that the novel is part of a larger storytelling tradition; in fact, it’s part of the one storytelling tradition–the story of what it means to be human. How can you not want to read along?

A parting critique must be given for the terrible editing included in (absent from?) a book that celebrates writing.