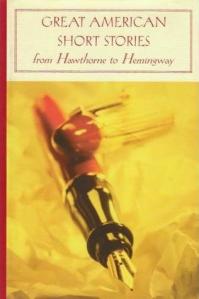 This is basically one of those anthologies I picked up because I felt like I should know the stories. I had read a few before, mostly the Hawthorne and Poe classics like “Young Goodman Brown” and “The Cask of Amontillado.” I soon found several other gems, from Stephen Crane’s tightly paced “The Blue Hotel” to Melville’s subtle “Bartleby the Scrivener”. The collection is diverse, and some stories could attract new readers based on their slick brevity alone, notably Twain’s “The Notorious Jumping Frog of Calaveras County.” Finally, I was impressed by Charlotte Perkins Gilman’s “The Yellow Wall-Paper” which is supposedly an early feminist work but seemed to me a horror story ahead of its time.

The introduction to the book is informative, but is probably best read after the stories since it references almost each individual one throughout. At the end of the book, there are two essays on the nature of the short story, one of these written by Poe. These are illuminating pieces on a genre that seems to contend with poetry as the most unfamiliar to the American public. It would be ideal if non-regular readers would pick up a short story every once in a while to see how much enjoyment can come out of a quick half hour of reading, and the stories chosen for this book are the greats.