Full title: The Drunkard’s Walk: How Randomness Rules Our Lives 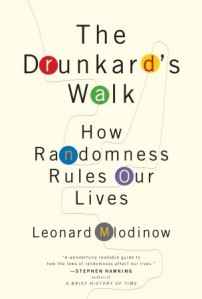 The Drunkard’s Walk functions as either a great introduction to probability and statistics, or a review for those who may have already learned much of the subject. Mlodinow plainly explains phenomenon like movies hitting it big (or failing), how Roger Maris broke the home run record, and why an expert stock market adviser will get you no further than a coin flip. I also liked how he structured many chapters around the lives of famous or lesser-known mathematicians, which put the concepts into historical perspective and provided needed narrative to balance the numerical examples. That leads into one complaint: he writes too many mathematical examples in prose, and does not use enough clear graphics. I can’t say I grasped each statistical problem he explained, and I pulled out my copy of The Curious Incident of the Dog in the Night-Time to review a clear layout of The Monty Hall Problem.

I also wish Mlodinow would have defined his terms better, and earlier. It’s not until page 122 that he distinguishes probability as “predictions based on fixed probability” and statistics as “the inference of those probabilities based on observed data.” And either of these terms would have been preferable over “Randomness” in the book’s subtitle. Randomness is explored in the book, but comes across as a sub-concept of probability; it is also too easily interchanged with “chance” and it is unclear whether the author means this to be so. Before reading, I had feared the author just latched on to a popular, over-used (and ill-defined) word. He did not quite prove me wrong there.

Some of my favorite material is in the social examples toward the end of the book. Mlodinow writes about how for the longest time, statistics in the form of societal censuses were not taken because it somewhat contradicted divine will–if we keep track of who is living and dying, and from which causes, then we presume to not be satisfied with the idea that it was all fate. A focus on statistics has large ramifications even in a modern society which is more used to its applications, because there are times when we still fall short of realizing how it affects us. “We unfortunately seem to be unconsciously biased against those in society who come out on the bottom,” Mlodinow writes. If you look at life as a numbers game, you will be less likely to boast of your accomplishments and less likely to show disdain to those just scraping by. Because of my attraction to these conclusions, this volume completes a sort of trinity in my current philosophy, the other books being Sam Harris’ Free Will and David Eagleman’s Incognito. In fact, if I were to attempt to send a reader down this general path, I would probably start with The Drunkard’s Walk as the non-threatening entry point. And if that reader takes seriously what the author is implying, it should change the way he or she thinks in significant ways.